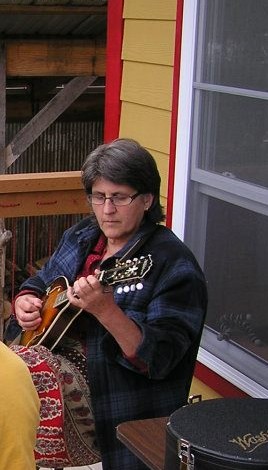 Born in England, I grew up in Canada and Australia. My family came “home” to England when I was ten, but I was already an Aussie at heart, in love with the old convict songs from Botany Bay, the same songs and Scotch Irish fiddle tunes that are at the root of American oldtime and bluegrass music.

I’ve been playing bluegrass music on the guitar (mandolin, bass, or fiddle) since I was twelve. I arrived in the States in 1986 and hosted a weekly bluegrass radio show from 1987 to 2014. Now I play MUSIC OF THE WORLD on KOPN Community Radio, on the 3rd and 5th Tuesdays of the month, from 3 to 5 pm CST, featuring music from outside the borders of the USA.

I have two CDs of original fiddle tunes for sale, and each CD has a Tunebook with the notes and chords.